OUR CAMPAIGN TO EXPAND THE RIGHT TO COUNSEL TO STOP EVICTIONS

Right to Counsel (RTC) has been a huge success in stopping evictions of low-income New Yorkers. In the first two years of RTC’s five-year phase-in, 84% of the tenants who had a lawyer under the law remained in their homes. Evictions in RTC zip codes declined by 29% since the law was implemented in 2017.

While RTC has been successful, there are still several ways NYC can expand its first-in-the-nation law to ensure more tenants have and use this right. We are grateful that NYC Council Members Mark Levine and Vanessa Gibson, who championed the city's groundbreaking RTC legislation, have introduced three bills that would strengthen the law: Intro 2050, Intro 1104 and Intro 1529.

Other cities have already passed RTC laws that are even stronger than ours. San Francisco, Boulder and Baltimore have no income eligibility limits and Newark's law covers appeals. Given the massive number of evictions facing NYC, now is the time for NYC to continue to set the standard for the nation and strengthen its RTC.

INTRO 2050: REQUIRES THE IMMEDIATE IMPLEMENTATION OF RTC ACROSS NYC

Introduced by City Council Members Vanessa Gibson and Mark Levine, Intro 2050 would amend Local Law 136 and require immediate implementation of Right to Counsel with no zip code rollout. This would:

Why should no case move forward without an attorney?

Click Here to Call Your Council Members TODAY to get them to sign on to this important bill! Find out if you Council Member is sponsoring Intro 2050 and view a sample phone script HERE.

More info is on our one pager: English | Spanish | Bilingual

INTRO 1104: WE WANT TO EXPAND WHO IS ELIGIBLE FOR THE RIGHT TO COUNSEL 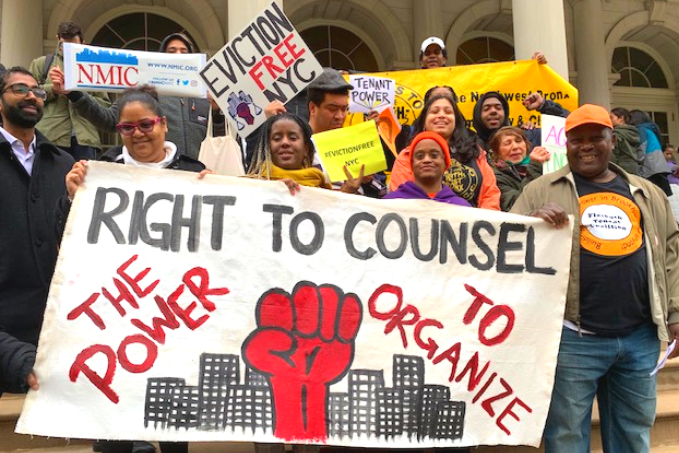 To be eligible for full legal representation under NYC’s current RTC law, a tenant’s household income must be 200% or below the federal poverty level (FPL). That is a yearly income of less than $25,520 for a single adult or less than $52,400 for a family of four. This means a single New Yorker working full-time and making the $15 minimum wage would not qualify for RTC. Faced with an eviction, working class tenants would not be able to afford a lawyer. Without a lawyer, these tenants are more likely to get evicted. We are calling for an increase of RTC’s income eligibility level from 200% of the FPL to 400% (which is a yearly income of $51,040 for a single adult and $104,800 for a family of four). Tenants with incomes between 200%-400% of the FPL make up an estimated 31% of tenants in housing court. Doubling the income threshold may help an additional 56,000-71,000 households facing eviction each year in housing court, meaning almost everyone who is in housing court now would be eligible for full legal representation.

Currently, RTC only covers eviction cases that take place in NYC’s housing courts. While most eviction cases are held there, several hundred are left to higher courts or administrative hearings. All low-income tenants facing eviction, regardless of their type of case, should have the right to a lawyer. Additionally, though the current law guarantees tenants a lawyer for the entirety of their cases, it does not cover appeals. With more tenants than ever being represented and winning their cases, landlords are filing more appeals. Without legal representation to defend their victories, tenants will be left alone when the final and most important decision is made.

INTRO 1529: WE WANT TO ENSURE TENANTS KNOW ABOUT AND USE THE RIGHT TO COUNSEL 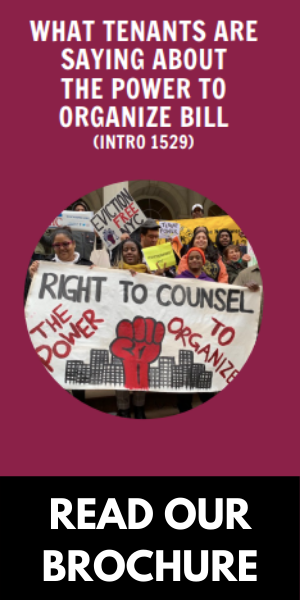 Intro 1529 requires the city to work with trusted tenant organizing groups to engage and educate tenants about their rights. While our work to stop evictions and decrease eviction filings is proving to be successful, we must also ensure that landlords don’t find other ways of forcing tenants to move out—outside of the legal court process. A report by Robin Hood found that 54% of forced moves that take place in NYC are the result of informal evictions, such a tenant leaving due being told to leave, landlord harassment, a lack of repairs, etc.  In order for RTC to continue to be effective, everyone needs to know about it, understand it, and use it as a tool to address all their housing issues. With all the new rent laws recently won in NY state, it is especially important that tenants fight for their rights, knowing that they have the right to a lawyer if their landlord did try to evict them in retaliation. When tenants don’t know or use their rights, they are more easily harassed out of their apartments. This leads to the displacement of mostly poor tenants of color in NYC.

Yet, we estimate that the majority of tenants don't know about RTC. A survey done by volunteers at Bronx Housing Court found that 53% of tenants who had a right to a lawyer didn’t know about this right before arriving in court. This means tenants might decide not to appear in court, decline representation, sign agreements with landlord attorneys prior, decide not to ask for repairs in fear of being evicted, and a host of other severe consequences. Intro 1529 would require the city to support organizers who would work to ensure that tenants know about their Right to Counsel and feel supported using it. Everyone who is eligible for RTC has a right to know about it!

LEARN MORE ABOUT OUR CAMPAIGN 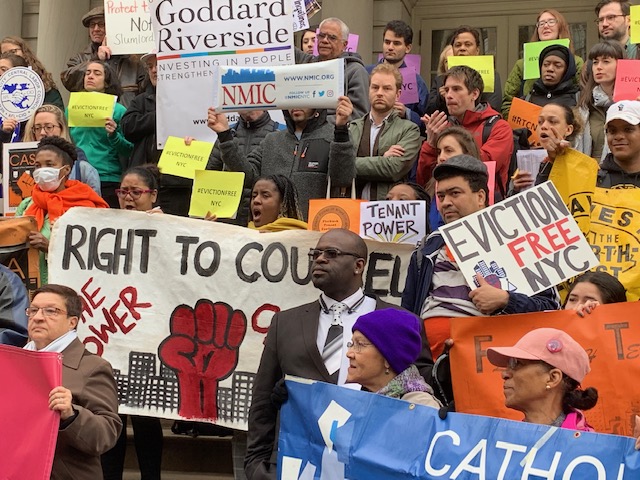