When we fought for a Right to Counsel (RTC), we knew that more tenants could stay in their homes if they had lawyers to fight their eviction cases. Today, a new analysis confirms that with RTC in effect just over a year, the law has been a powerful tool in stopping evictions!

In addition, the zip codes where a RTC has been implemented accounted for more than 60% of the overall decline in evictions analyzed.

The analysis compares zip codes where RTC is currently implemented to zip codes without RTC that have comparable rates of poverty, eviction, and rental units. 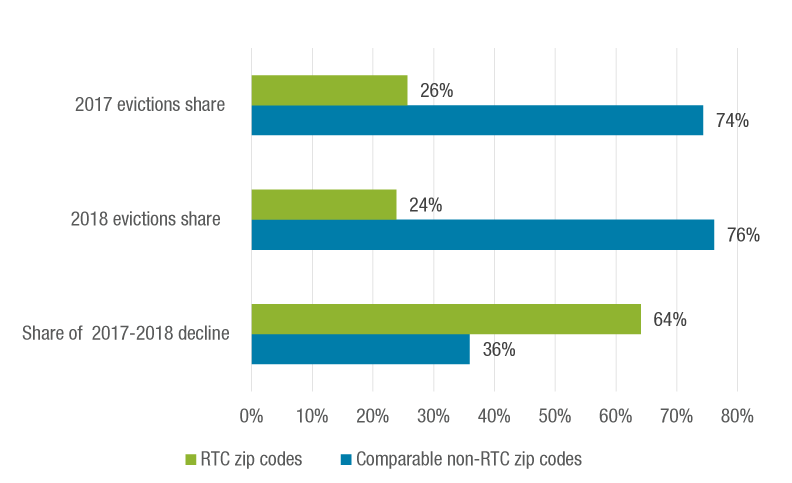 Source: “NYC Right to Counsel: First year results and potential for expansion,” a report by the Community Service Society of New York.

RTC is currently in effect in 20 New York City zip codes, and will be phased-in citywide by 2022. In just one year, the data confirms that the law has successfully decreased evictions!

The new analysis also found that many tenants ineligible for RTC face housing hardships—such as being threatened with eviction, falling behind on rent, or moving in with other people. That's why we're currently working on passing Intro 1104, which would expand RTC's income threshold from 200% of the federal poverty level to 400%.

The report found that passing this law may cover an estimated additional 31% of tenants in housing court, meaning that with this new law, nearly all tenants facing eviction in housing court would have a right to full legal representation.

Additionally, the coalition is working on introducing legislation to fund community organizing groups to educate and conduct outreach about RTC, so tenants know about the rights they have to defend their homes.

Check out the new report, our press release, our new fact sheet on RTC's success in year 1, and our one-pager in English and Spanish on our campaign to pass Intro 1104 and fund community organizing.