On Tuesday night, we held our first, powerful and packed People's Tribunal on Evictions! More than 250 tenants, organizers, lawyers and advocates attended a packed and powerful People's Tribunal on Evictions! Dozens of tenants from across the city testified about eviction, harassment, and uninhabitable conditions--many of them live in buildings owned by the Worst Evictors. 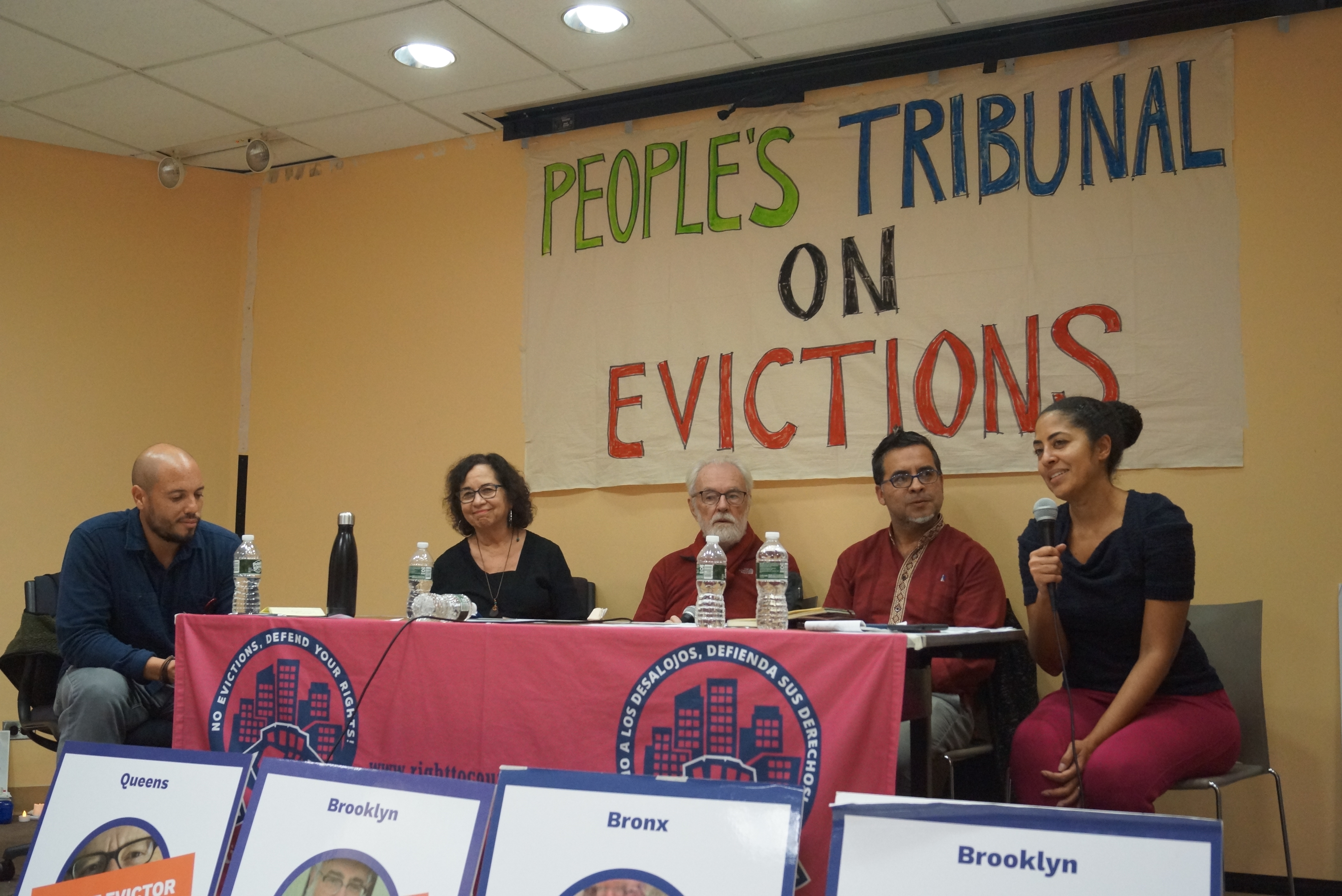 The jury--Iris Morales, David Harvey, Ejim Dike, Daniel Joseph Wiley and Juan Carlos Ruiz de Dios--found the testimony devastating and indicted Landlords, the City and the banks on criminal and civil charges, and called on tenants to organize rent strikes and takeover buildings. Jury member David Harvey, Distinguished Professor of anthropology and geography at the CUNY Graduate Center, explained the jury’s decision. “The evidence we had is devastating,” Harvey said. “In this city, there is so much awful delivery of what should be a basic right for everybody to live in a decent house and a decent living environment.” Jury member and former Young Lord, Iris Morales, who was on the jury for the People’s Housing Crimes Trial in 1970, read aloud the penalties. They included prohibiting landlords who have outstanding violations from purchasing additional buildings as well as paying a fine to each tenant they violated.  “We want to also indict the federal state and city as co-conspirators for their rezoning laws… the tax breaks they give landlords … and for allowing harassment,” Morales said. “We also indict the banks that support these abusive practices.”

The jury's indictments came after hours of powerful testimonies from tenants across the city.

Linda Williams, a tenant leader with the Flatbush Tenant Coalition in Brooklyn, testified along with fellow tenants against Moshe Piller, #16 on the list.  “We are living in unhealthy conditions, and I just don’t understand how he is able to get away with this as long as he has,” said Williams. “We have, for the last year, been having a problem with rats in the apartments … He has leaks coming from our roof right now down to the first floor. ...There’s no way I can see how he is able to get MCI increases. ...He needs to be investigated to see how he has been able to obtain another building two blocks away from us just two months ago.” Another leader, and MC for the night, Lloyd Smith testified about the h 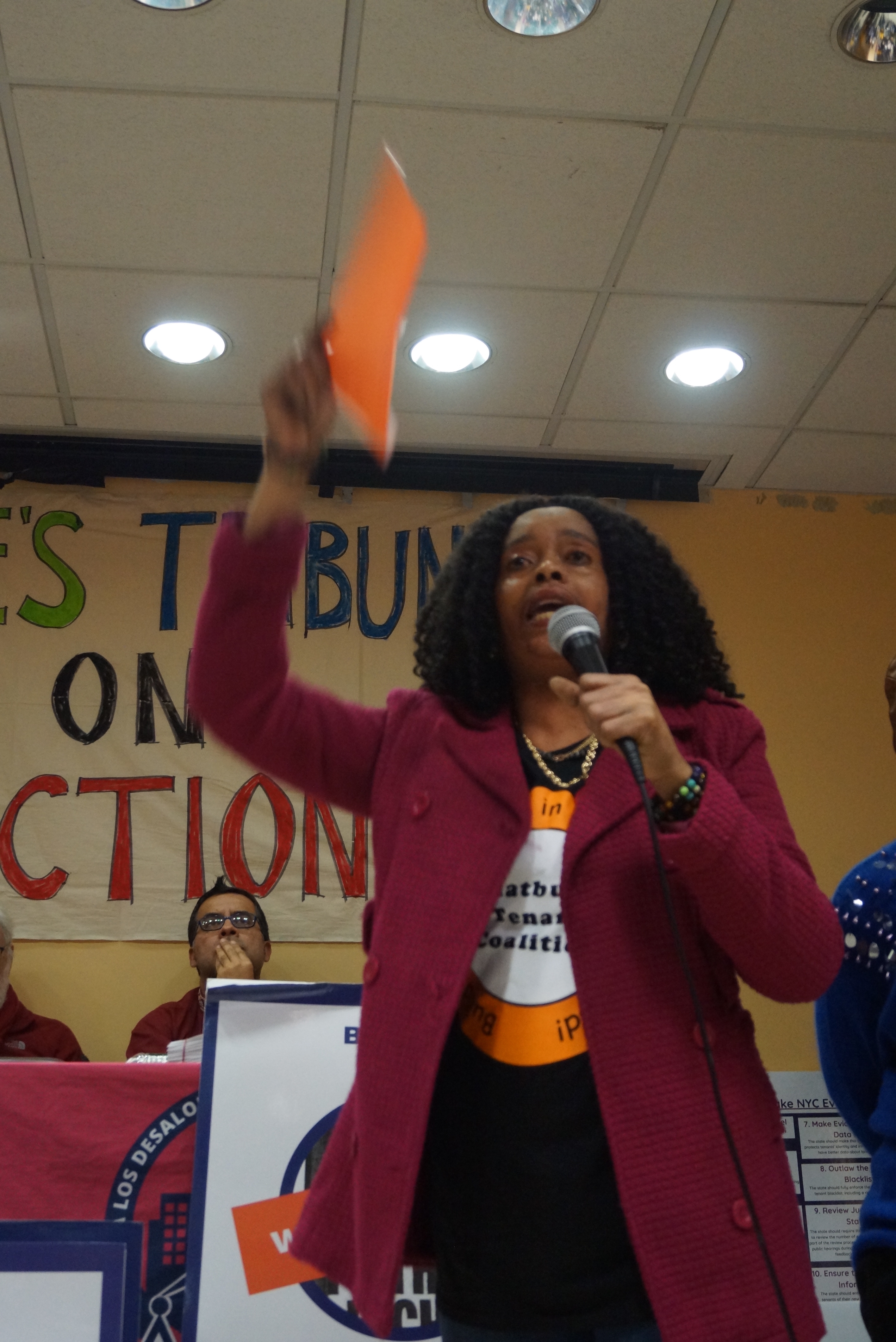 orrible conditions in his building.  “My building is in a state of disrepair,” he said. “We pay MCIs for a new roof and elevator that never works. I often ask myself this question, ‘Why are we paying?’ Tenants are taken to housing court for unpaid rent when in fact the management already cashed their checks or money orders. This is grade A harassment and vast maltreatment. I have organized in my building with the help of FTC and we are seeing results. We must continue to fight the fight because everyone knows that housing is a human right.” 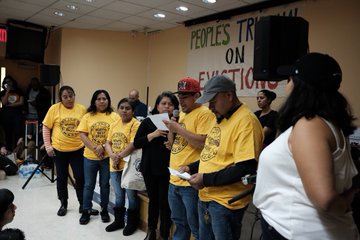 Tenants with the Northwest Bronx Community & Clergy Coalition testified against The Morgan Group, #7 Worst Evictor in the Bronx’s Right to Counsel zip codes. They explained why they are on rent strike and refusing to pay MCI increases for poorly done so-called improvements that resulted in leaks, lack of hot water, and broken cabinets.

“The MCIs were like an attack towards us,” said Floriberto Galindo. “They came in and tore things up… and there was dust all over the apartments for over a month … and we were not offered us any other place to stay during the construction…. They sent documents all in English and the calculations were very confusing…. These are tactics that confuse the tenants—even the lawyers working on this were confused...The Morgan Group has money—they don’t need to pass these costs to the tenants ...We don’t deserve to pay a dollar more. It is enough with the rent we are supposed to be paying.” 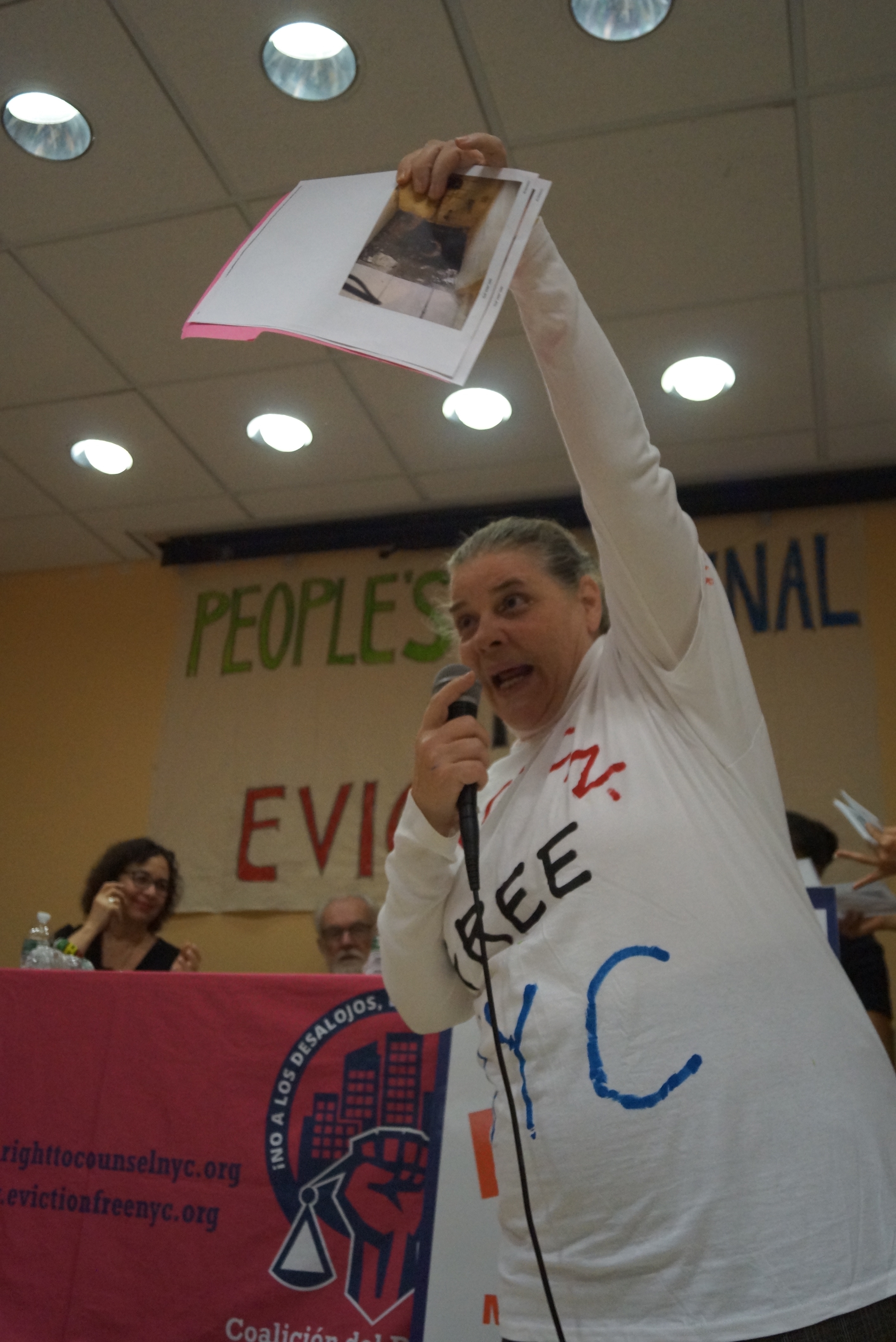 George Sotiroff and Magaly Sosa, members of Community Action for Safe Apartments (CASA) in the Bronx, testified against their landlord, Steven Finkelstein, #18 on the Worst Evictors List. “Six weeks after acquiring my building you began gutting and rehabbing all bathrooms and kitchens,” said Sotiroff addressing Finkelstein. “Tenants were not asked whether this was work that was welcome or necessary, nor informed by how much you hoped to raise their rents. You requested a rent increase of $59 per room, and at this point, even the most naive realized this was not a benevolent act on the part of the landlord…. It’s your business model to target rent stabilized buildings … and abuse the laws by using MCIs to raise rents dramatically and quickly to a point where many of us cannot afford to stay in apartments that many of us have called home for decades. You are enriching yourself by placing hardship on others, albeit by legal means.”

Other CASA members also testified. “This is my toilet. Does everyone see where it’s sitting?” asked CASA tenant leader Kim Statuto holding a picture of a toilet in a bathtub. “Not only that, 14 months no gas for my entire building. He made an agreement with us and he violated it. We are back in court for noncompliance ready to do a 7a on him. We through CASA, RTC, and Bronx Legal Services are organized to take 1515 Selwyn Avenue back from Abdul Khan.” 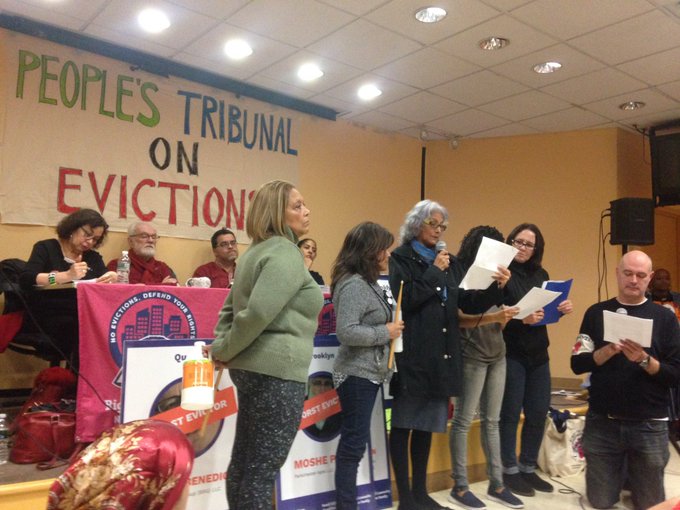 “BRG is the landlord that uses court the most to harass, intimidate, and evict us,” said Judith Rodriguez. “We have neighbors that have been taken to court multiple times without owing any money. We have neighbors who have been intimidated and taken to court because they organize. Others left their homes because they are tired of having to defend themselves in court and live in horrible conditions.”

Tenants also testified against the Office of Court Administration for their culpability in the  unjust culture of the city’s housing courts. 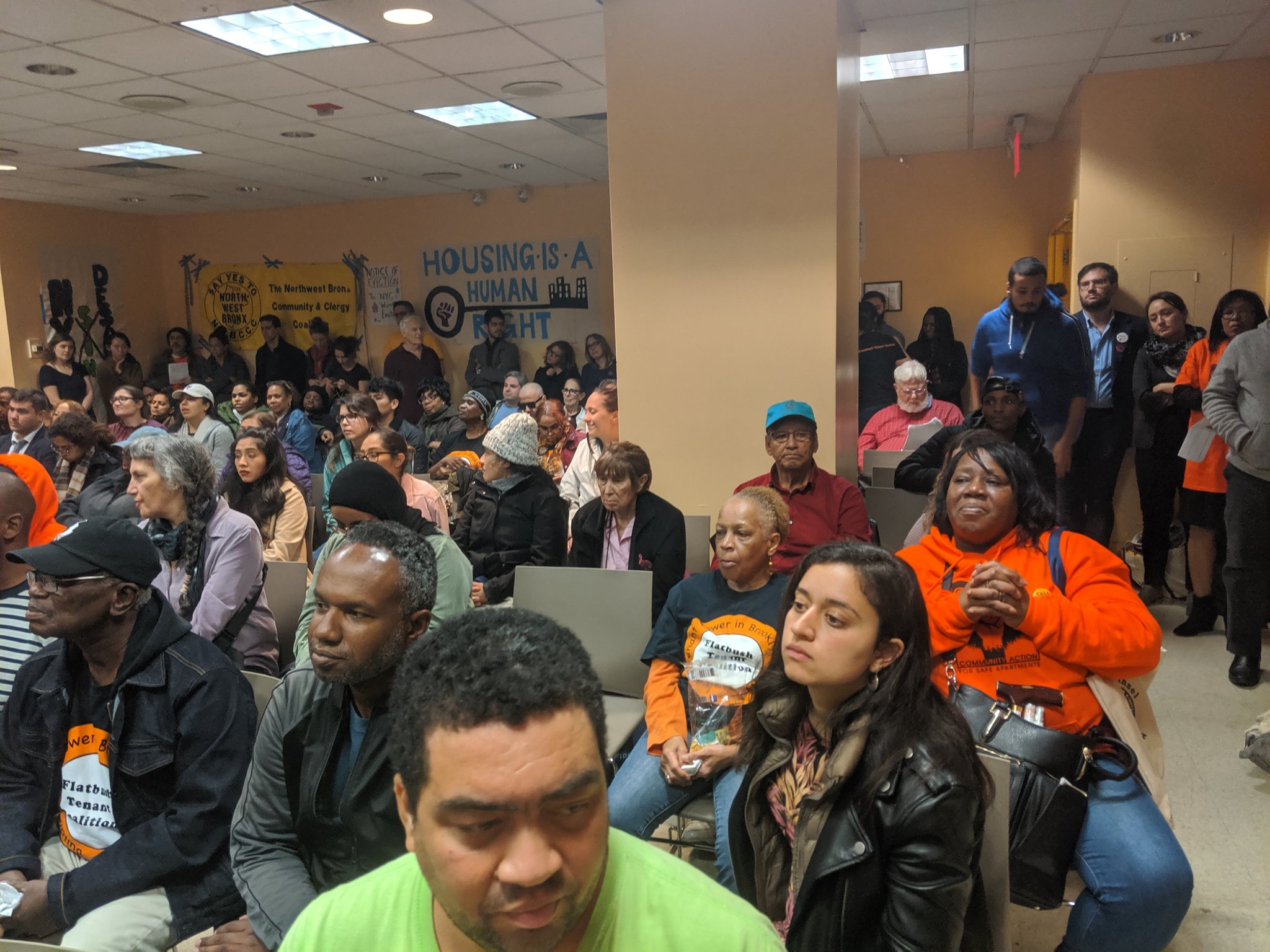 “We all know housing courts are not a place of justice,” said Marilyn Mullins, CASA tenant leader. “They are often hostile and confusing places for tenants. In the Bronx we have organized for over 5 years to reform housing court because we know that the culture of housing court has a power imbalance of favoring landlords. Despite the organizing efforts of tenants across the city to make changes, OCA has not done enough.” 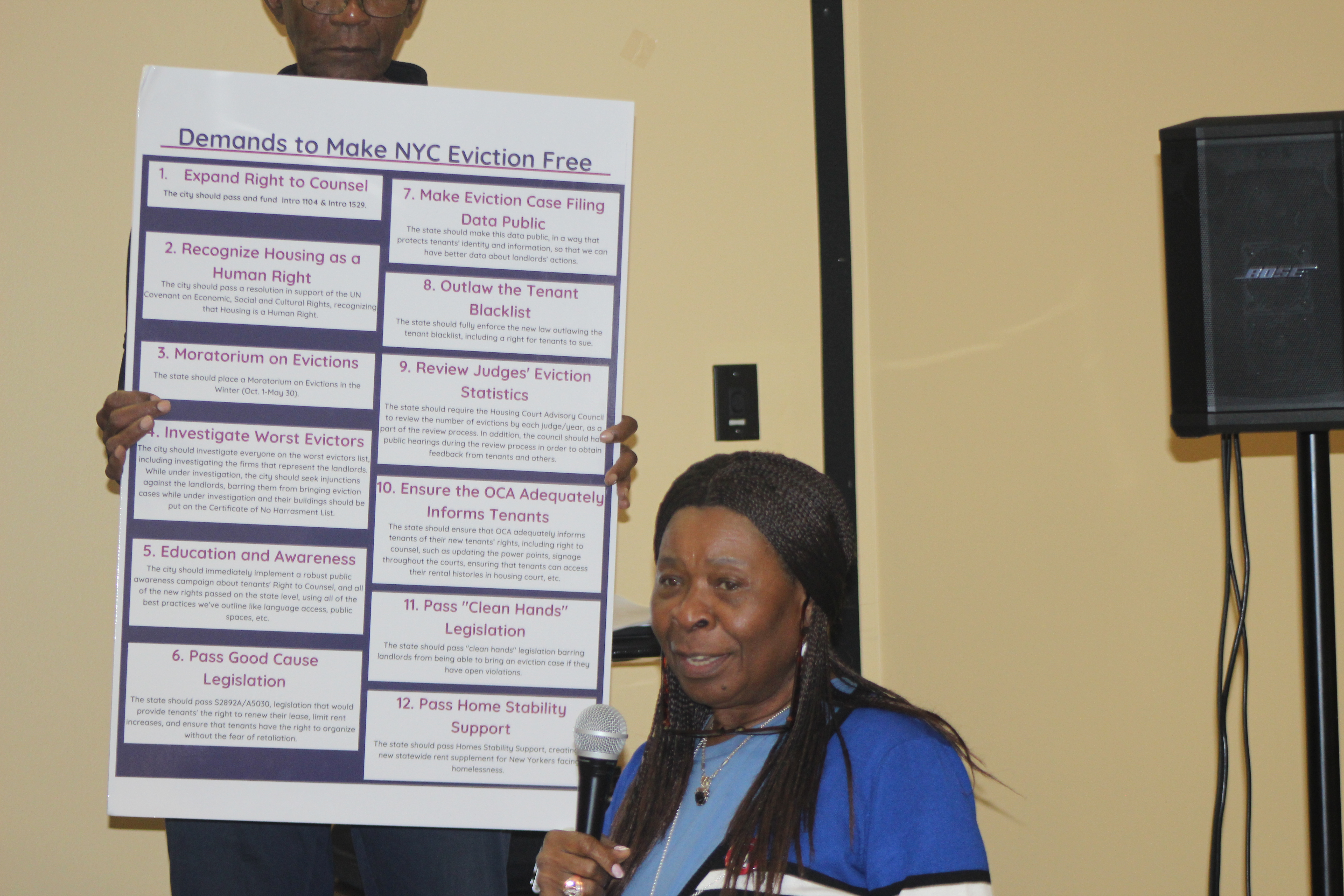 During the Tribunal, we also released 12 citywide demands, which include passing legislation to expand the Right to Counsel, investigate the Worst Evictors, and place a moratorium on evictions in the winter.

We also announced the launch of a new Eviction Defense Network, a direct action group to fight back against evictions. "We hope the Network will shift expectations about what's normal. Evictions are not normal," said Juan Nuñez, from the Northwest Bronx Community & Clergy Coalition. “Evictions are wrong. We have to resist them in every way, shape, and form.”  Interesting in learning more about the network?  RSVP here to join us at our first orientation in November!

Deep gratitude to everyone who worked so hard to put the tribunal together and to the hundreds of tenants who testified and stood in solidarity. A city without evictions is just and necessary and the tribunal was a beautiful testament to the power of collective action and vision.

You can view the entire event on video here. 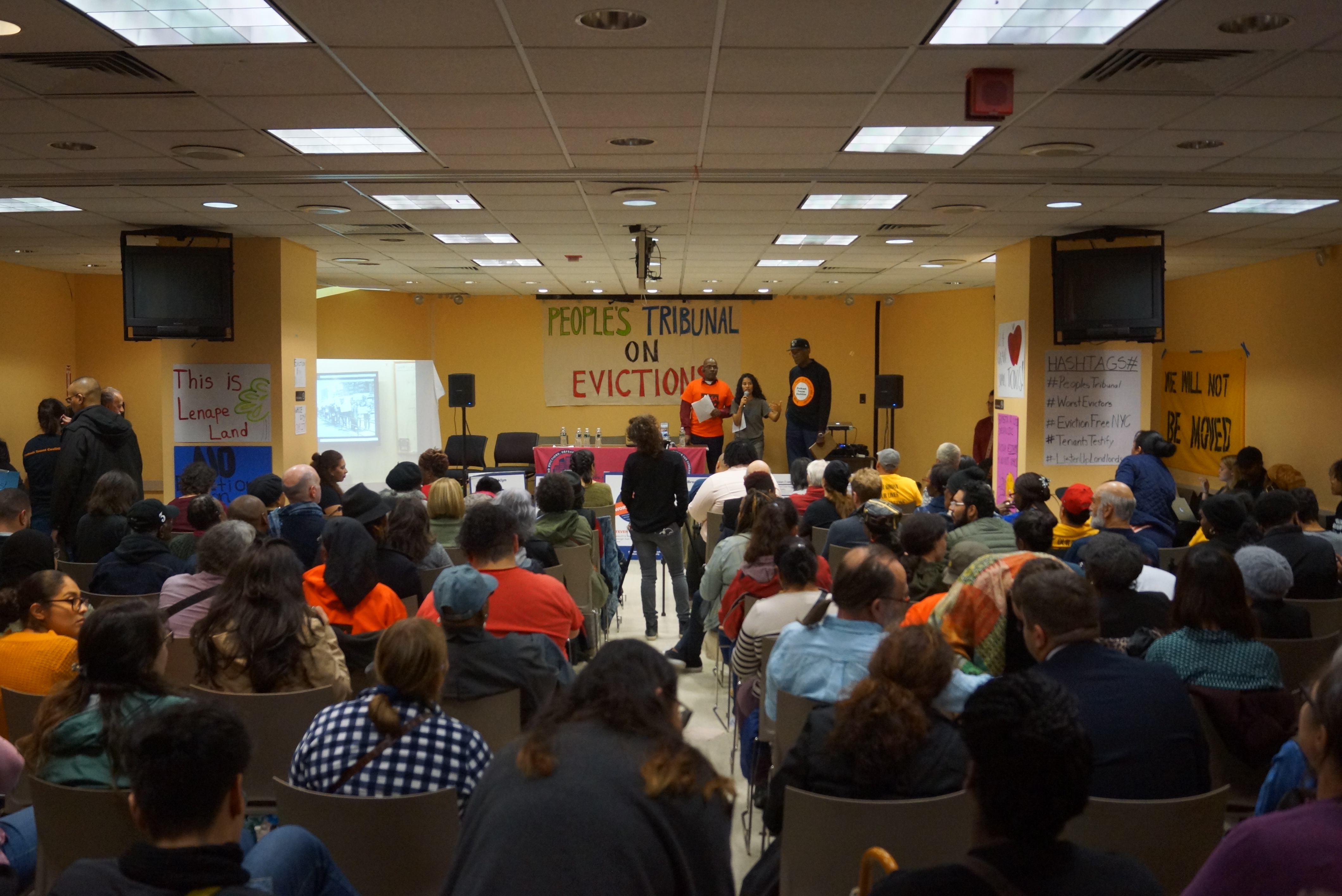 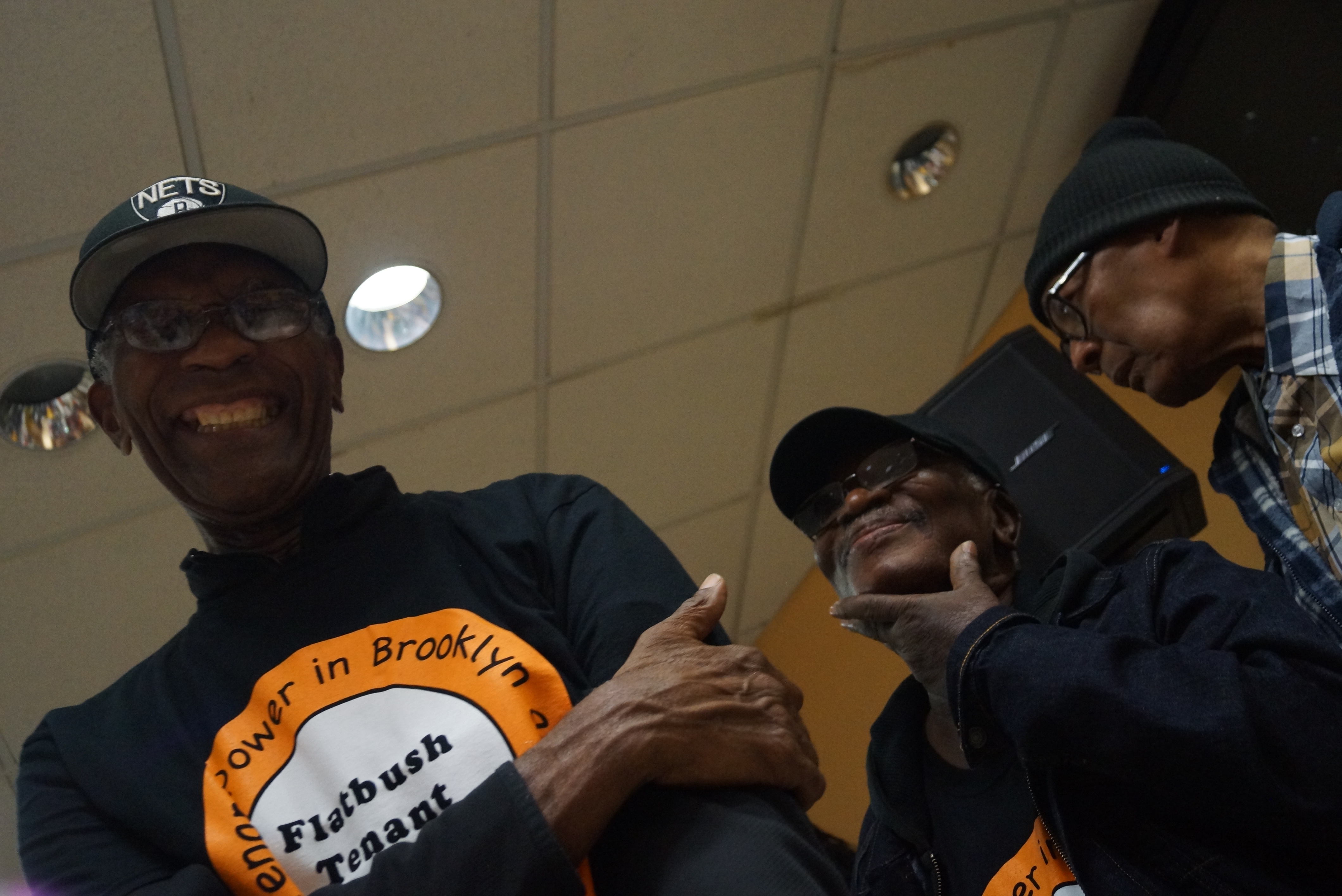