VICTORY! Two of Our Bills Passed to Expand and Strengthen Right to Counsel!

"My rent-regulated building was 1 of 80 bought by a predatory equity landlord fifteen years ago,” said Lauren Springer, tenant leader at Catholic Migration Services in Queens.  “But Catholic Migration Services, helped me, my neighbors, and fellow tenants organize and successfully fight back against the predatory practices which targeted the most vulnerable.  Later, we joined the fight to ensure the passage of landmark legislation guaranteeing legal representation to all eligible tenants facing an eviction in housing court. That right is even more critical given our current housing crisis made worse by the COVID pandemic.  It is truly momentous that the City Council has passed bills that would not only make the right to counsel immediately accessible citywide but would also fund community-based organizations to get the word out.” 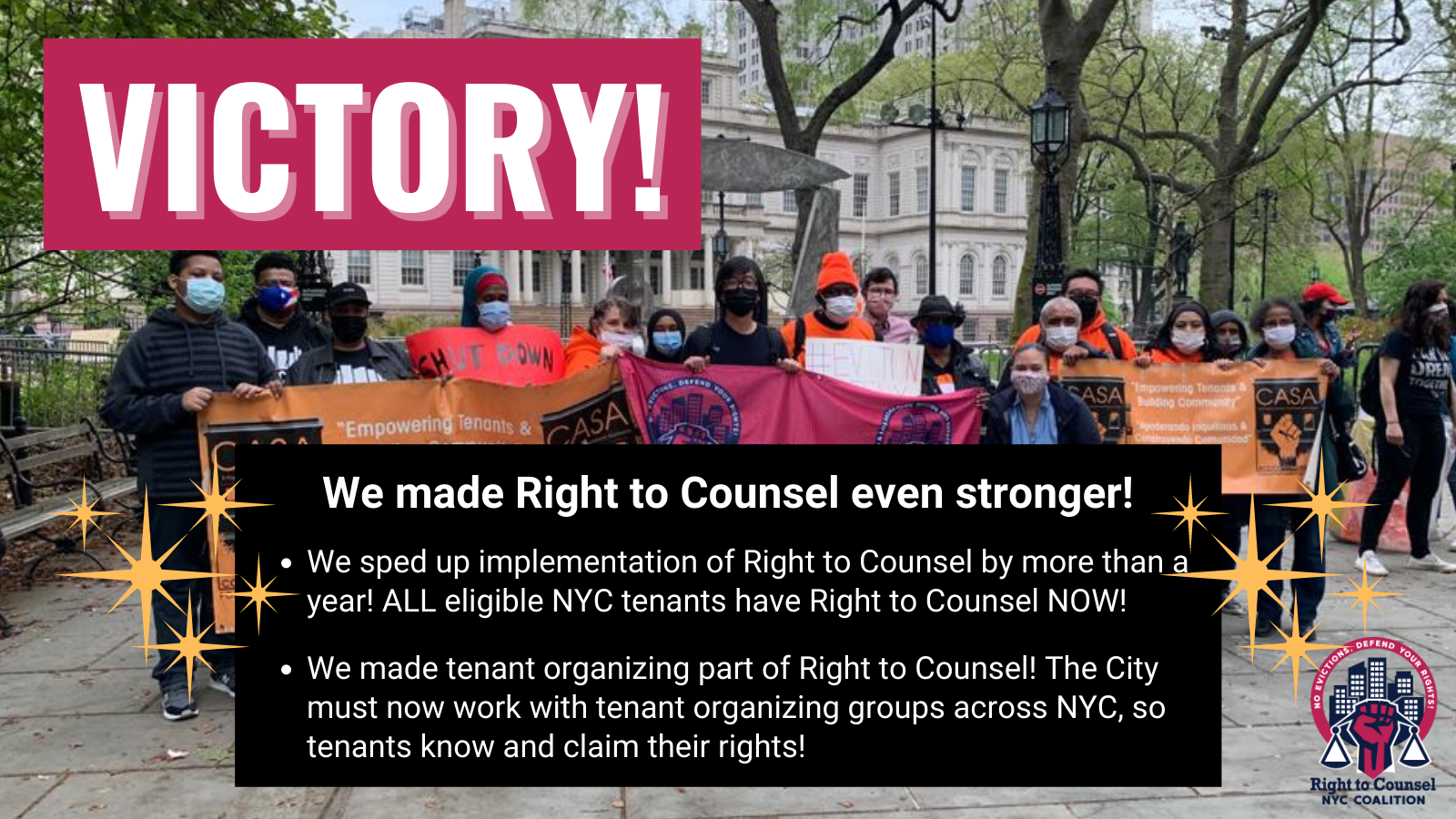 Just two years ago, we worked with Council Member Levine and Council Member Gibson, to introduce Intro 1529, legislation that would strengthen the current law by requiring the City of New York to work with trusted tenant organizing groups to engage and educate tenants about their rights.

Right to Counsel has proven powerful. Evictions in NYC have plummeted, landlords are suing tenants less and almost everyone who fights their eviction with an RTC attorney stays in their home.  But we know that the fight against eviction isn’t just in the courts. Landlords intimidate and threaten tenants before ever starting a court case.  While RTC is powerful, this critical legislation will make it even more powerful by ensuring that all tenants know about the RTC law, understand it, and use it as a tool to enhance and enforce their rights.  We know that trusted tenant organizing groups are the best positioned to do this work.  We are excited that this bill recognizes that.  We will be working hard to make sure the council and the administration fully funds this law and works to set up the infrastructure to support tenant organizing groups as soon as possible.

“If it wasn’t because of organizations like CASA, I'm not sure if me and my daughter would have a roof over our heads now,” says Ana Galvez, CASA Leader. “NYC residents need security and support in these times of crisis. We need a lawyer in Housing Court and we need to be informed about it. When tenants don’t know they have a Right to Counsel, they might decide not to appear in court, decline representation, sign agreements with their landlord's lawyer prior, decide not to ask for repairs in fear of being evicted, or face a variety of other serious consequences. Intro 1529 would require the city to support organizers who would work to ensure that tenants know about their Right to Counsel and feel supported using it. More tenants will be prepared to defend their homes against eviction and fight for their right to a safe, affordable home.”

As Right to Counsel gains national attention, we hope this also sets a precedent for cities and states across the country that the success of Right to Counsel depends on the power of organized tenants.

City Council also passed Intro 2050, which we worked to get introduced in the early fall of last year, in response to the devastating impacts of COVID19.  When RTC was first passed, the city had five years to fully implement it, or by no later than July 2022.  Recognizing that moving eviction cases forward while some tenants have attorneys and some don’t during a pandemic would be severely unjust, this bill accelerates the implementation of RTC by more than a year, making it fully in effect by June 1 of this year. This is a major victory for all NYC tenants.

"This day truly calls for celebration. Getting here was daunting, but well worth the fight! It was as if we were in a ring taking punches from every direction but never backing down.  Now, they see the spark that never died out and the will to fight for the forgotten that is the majority. Intro 1529 and Intro 2050 is just the beginning! Expect more to come from coalitions that are growing in numbers as we continue to educate and eradicate those that do not have our best interest." said N’Jelle Murphy, tenant leader with the Flatbush Tenant Coalition

The fight is not over.  We must:

We want to celebrate all of the work of all of the coalition members who had the vision, strength and commitment to work to implement RTC and expand it, especially during these unprecedented times.

“This is a tremendous victory for tenants across New York City. Due to the public health and economic crises wrought by COVID-19, tenants need the Right to Counsel now more than ever. With the passage of these two bills, more tenants facing eviction will have and know about their right to counsel — a critical step towards stopping evictions and keeping New Yorkers in their homes,” said Malika Conner, Director of Organizing at the RIght to Counsel NYC Coalition.

We also applaud the work of the RTC bill sponsors, Council Member Levine and Council Member Gibson who have worked tirelessly with the coalition since the beginning.

“Being evicted is a real fear for many New Yorkers. Aside from being removed from your home, an eviction on your record can make it extremely difficult for tenants. Many landlords will not even consider your application with a prior eviction on your record and this can lead to stigmatization that follows people for years,” said Council Member Gibson. “Intro. 2050 and Intro. 1529 would expand upon the current Right to Counsel legislation passed in 2017 and ensure legal representation in housing court for every eligible tenant throughout New York City. Right to Counsel levels the playing field for tenants and their families, and this expansion will provide even more opportunities for New Yorkers who are rent burdened and facing evictions every day across our city. I want to thank my colleague and partner on this legislation, Council Member Mark Levine, the Right to Counsel Coalition, and all the advocates that have been with us from the beginning pushing this legislation forward and for the rights of tenants throughout the five boroughs."

“We are facing the very real potential of the worst avalanche of evictions in the city’s history,” said Council Member Levine. “Expanding Right to Counsel to all zip codes immediately is critical to protecting vulnerable New Yorekers still dealing with the devastating aftermath of the pandemic.  We are telling all tenants today loud and clear - you will not have to face the terrible prospect of losing your home on your own. We know that representation works - and we know that in the majority of cases having a lawyer means better outcomes for tenants. The stakes couldn’t be higher - we need to make sure that New Yorkers facing eviction are staying in their homes, off the streets, and out of the shelter system and we need to give more people access to this program NOW.”

When we fight, we win!