Sign our petition to the mayor to expand Right to Counsel! 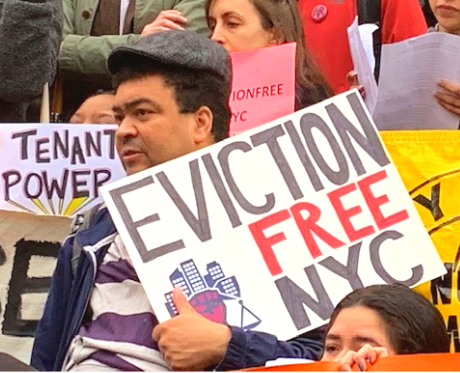 Since NYC passed Right to Counsel in 2017, tens of thousands of low-income New Yorkers who faced eviction in housing court have been able to remain in their homes. We urge you to expand the law, passing Intro 1104 and Intro 1529, so that more New Yorkers have the right to defend their homes.

We are grateful that NYC Council Members Mark Levine and Vanessa Gibson, who championed the city's groundbreaking RTC legislation, have introduced two bills that would strengthen the law.

Right now, a single, full-time tenant earning the $15/hour minimum wage makes too much to qualify for Right to Counsel. Intro 1104 would double the law’s income threshold, so that nearly all tenants in housing court would have the Right to Counsel. This law also expands the types of cases that can be defended, beyond housing court, so that all evictions are covered.

Intro 1529 would require that the city work with community organizing groups so that tenants know and assert their rights. A recent survey in housing court found that 53% of tenants who had a right to a lawyer didn’t know about it before arriving in court. The law is only powerful if tenants use it!

In just one year, Right to Counsel has proven to be a powerful tool in stopping evictions. We can’t stop there. As New Yorkers, we are calling on you to combat inequality, and to continue to lead the city and nation on Right to Counsel, by passing and funding Intro 1104 and Intro 1529.

Learn more about this campaign here.